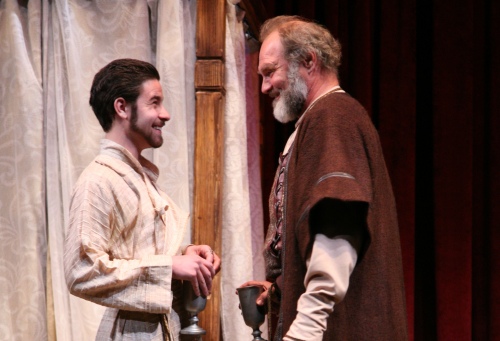 William Westhoven, theater columnist for the Daily Record, has named The Shakespeare Theatre of New

Jersey’s critically acclaimed hit production of James Goldman’s THE LION IN WINTER, the ‘BEST COMEDY of 2010.’ Click here for his selections for 2010.

“Best Comedy: ‘The Lion in Winter’ at the Shakespeare Theatre of New Jersey…with an incomparable cast and James Goldman’s deliciously tart dialogue, ‘Winter’ gets the nod.”

In addition, Westhoven has singled out Sherman Howard and Lisa Harrow as 2010′s ‘Best Bad Boy’ and ‘Best Bad Girl’ respectively, for their lauded performances as Henry II and Eleanor of Aquitaine:

“You could argue that Sherman Howard’s performance as King Henry II in ‘The Lion in Winter’ is worthy of Best Comedic Actor. But traditionally, this is among the most coveted of Daily Awards. Ditto for Lisa Harrow, who as Eleanor of Aquitaine gave as good as she got from hubby Henry in ‘The Lion in Winter.’“

THE LION IN WINTER was presented as part of the Shakespeare Theatre of New Jersey’s 2010 Main Stage season under the “compelling direction” (Curtain Up) of Paul Mullins. The cast featured Lisa Harrow as Eleanor of Aquitaine, Sherman Howard as King Henry II, Tom Pelphrey as Richard Lionheart, Colby Chambers as John, Devin Norik as Geoffrey, Laura Campbell as Alais Capet and Sean Hudock as King Philip II. THE LION IN WINTER was Stage Managed by Kathy Snyder and featured set design by Michael Schweikardt, lighting design by Michael Giannitti, costume design by Hugh Hanson, and sound design by Rich Dionne.