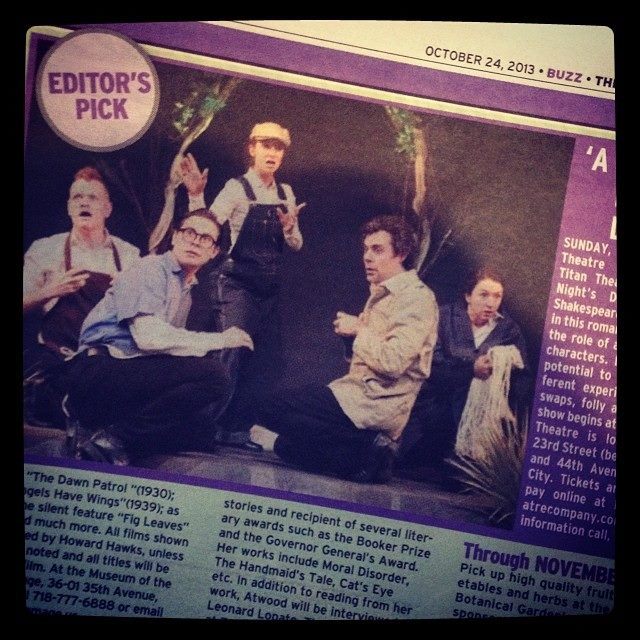 Outstanding Actor in a Play — OK, so we’re going to cheat a little and present this award to the entire cast of Titan Theatre Co.’s “A Midsummer Night’s Dream.” In Lenny Banovez’s production, Ryan Lee, Gregory Isaac, Alexis Black, John Finnegan, Emily Trask, Laura Frye, Sean Hudock, Lloyd Mulvey and Matthew Foster play all the roles in a Russian roulette version of Shakespeare’s comedy. Parts were anointed at the start of each performance so throughout the run, men played many of the female characters while the women took over the masculine roles. And despite not knowing who they would be that night, each cast member presents a complete character and delivers the goods.

Outstanding Production — There’s no doubt that Titan Theatre Co.’s version of “A Midsummer Night’s Dream” was the best production to play the borough this past year. Director Lenny Banovez proved he can just as easily handle musicals with his steampunk version of “Oliver! The Musical,” but it was his take on the Bard that earned universal praise from audiences and critics. Shakespeare’s most accessible comedy was performed at breakneck speed by a talented group of nine actors portraying all 16 roles in an interchangeable cast. During the rehearsal period, Banovez was probably the least-liked man in New York City’s theater world as his cast was required to learn the entire script. But his vision — or madness — paid off with a breezy evening of theater that leaves the audience wanting more. And we may be in luck. Banovez said he is currently in the process of negotiating the next steps to take the show across the river for a New York run.”